CAMBRIDGE, MA – When Marc Abrahams had a recent weekly meeting with several friends at a small cafe near Harvard University, the main topics over tea and sandwiches were the gossip of researchers.

Abrahams, 63, is a global touchstone for those who love science and humor. He established the renowned Ig Nobel Prize 28 years ago and has been at the center of it ever since. But customers at the cafe, including young women in Harvard T-shirts, didn’t seem to notice him.

The indifference, he says, isn’t a personal obstacle, but rather may also jeopardize the future of American science, which now boasts the world’s best. 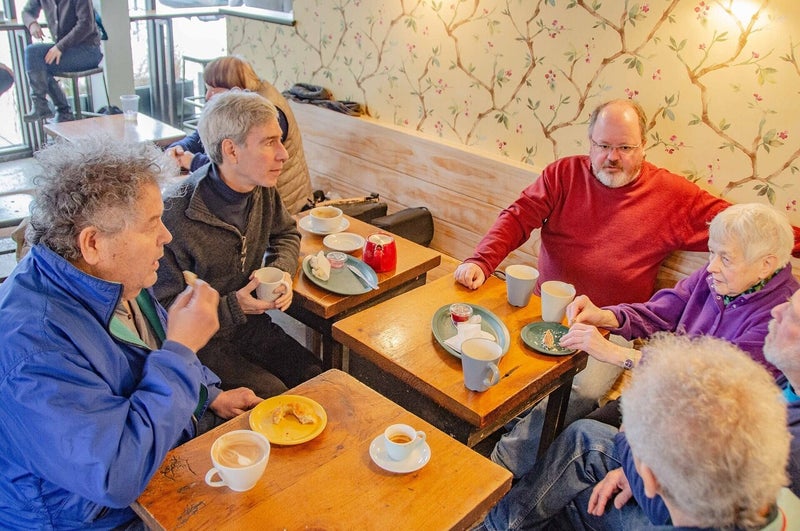 Abrahams (2nd person from the left) talking with friends at a cafe near Harvard on December 6th, 2019

The Ig Nobel Prize often referred to as “Parody of the Nobel Prize,” is an extension of Abrahams’ bimonthly magazine “Annals of Improbable Research,” which announces Ig Nobel winners each September.

About 100 people, including Ig Nobel and Nobel laureates and those who know little about science, debate the issue and choose about 10 prizes each year. Weekly gatherings at a cafe are also a forum for discussion.

When the award started in 1991, there were two motives, Abrahams said. First, he needed some regular events for the magazine. The other was a sense of mission.

“As soon as I became the editor, I was meeting lots and lots of people who’ve done very strange and wonderful things that were funny and prospecting,” Abrahams said. “I thought, ‘It’s wrong that nobody knows these people exist, someone should do something about that.’”

Early awards set the tone for the Ig Nobels:

- The 1991 Chemistry Prize: For the persistent discovery that water, H2O, is an intelligent liquid, and for demonstrating that water is able to remember events long after all trace of those events has vanished.

- The 1991 Biology Prize: For pioneering development of the Repository for Germinal Choice, a sperm bank that accepts donations only from Nobellians and Olympians.

But it has been changing. The award now rather focuses on fascinating research in pure science. They sound silly, and nobody knows what they’re going to do, but they’re concrete results done in a legitimate scientific procedure.

Abrahams said the change wasn’t intentional. He speculated that one of the reasons might be the increase in the number of recommendations as the award became famous.

“More and more people in the world send us nominations,” Abrahams said. “A few years ago, I did a very rough count. And it looked like that year which shows typical; We were getting 9,000-10,000 nominations.”

The award started out as a parody but its authority is already global, in a sense. The annual awarding ceremony is held at Harvard or the Massachusetts Institute of Technology (MIT) with Nobel laureates attending.
The United States is the world's largest scientific nation with many top-notch research institutes, including Harvard and MIT. The number of Nobel laureates clearly shows their power. 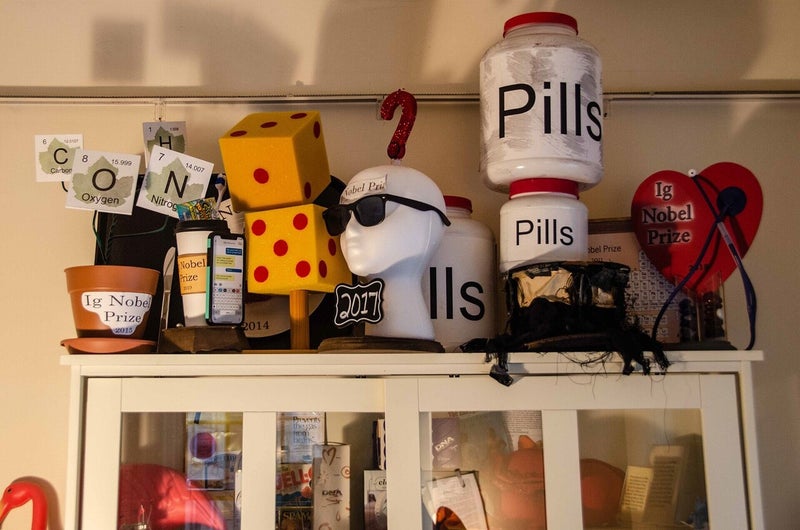 Ig Nobel goods that were used at the ceremony

In the last 10 years, U.S. researchers accounted for 49% of the total awards in physiology or medicine, chemistry, and physics. The United Kingdom came in second with 16%, while Japan came in third with 14%.

The U.S. has an advantage in its massive investment in research and development. According to the Organization for Economic Cooperation and Development statistics, U.S. investment in 2017 was the largest in the world at $483 billion. U.K. and Japan have $43 billion and $155 billion, respectively.

What about the Ig Nobel Prize? The top three countries over the past 10 years were the same as the Nobel. But the U.S. accounted for only 18%. Japan ranked second with 14%, followed by the U.K. with 8%. The presence of the U.S. is not so big. 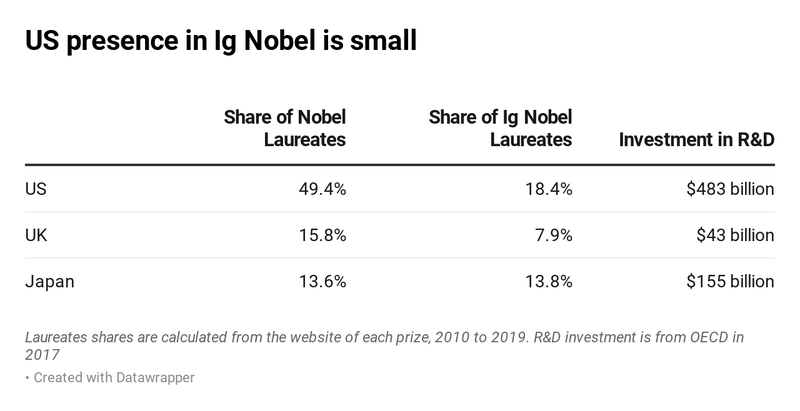 Why so different? Eight Ig Nobel laureates answered this question by email.
Their answers were broadly divided into two. First, unlike the Nobel, the Ig Nobel is not something that money can buy.

“I think that the overwhelming investment in the U.S. is the reason why the share of Nobel Prize winners is overwhelming,” wrote Hokkaido University Associate Professor Kazunori Yoshizawa, who won the 2017 Ig Nobel biology prize for discovering that specific insect females have penis-like organs that males usually have.

“The Ig Nobel Prize is not given to funded research, nor is it a prize you can target and win.”

Similarly, Prof. Atsunori Higashiyama of Ritsumeikan University suggested that any country that guarantees academic research freedom could produce a number of winners commensurate with its population.

Higashiyama received the “perception prize” in 2016 for his report on the curious “matanozoki-effect,” a phenomenon in which distant objects look smaller and closer when our visual field turn upside down by standing with our head between our crotches.

“The Ig Nobel often results from scientists pursuing their own curiosity, and it’s thus different from the grant-driven research that leads to the Nobel Prize,” said Georgia Tech Professor David Hu, who won physics awards two times in 2015 and 2019 for revealing that mammals spend a fixed amount of time peeing regardless of their body size, and discovering that the elasticity of wombat’s intestines contributes to their square-shaped poop.

“My research that won the Ig Nobel never had any funding, and that is also the case for several other winners I talked to.”

Another reason may be that Americans are less interested in the Ig Nobel.
Justin Schmidt, Ph.D., of the University of Arizona, who won the 2015 prize in physiology and entomology for inventing the “Schmidt Sting Pain Index” that quantifies insect bites’ pain, suggested the award is undervalued in his country.

“The U.S. does not invest in the type of research that gets an Ig Nobel and society tends to look down on those who are doing research that gets that award; that is, until after the award is given, and then it is celebrated,” Schmidt wrote. “Curiosity does not generate money.”

In 2012, the American Physical Society published an article entitled “Ig Nobel Research is Serious, After All.” They wrote: “They’re given to scientists whose scientific publications on the surface might sound silly or even frivolous, but have meaningful science behind them.”

Prof. Raymond Goldstein of Cambridge University, who won the Ig Nobel in physics that year for “calculating the balance of forces that shape and move the hair in a human ponytail,” pointed out bitterly in the email.

“It is quite possible that the lower relative rates of U.S. awards indicate that scientists there are not free to think more seriously (and humorously) about problems,” Goldstein wrote. “Whereas those of us elsewhere are intellectually liberated.”

The free-thinking may also apply to the perceptions of the Ig Nobel’s in other countries.

Georgia Tech’s Hu commented that the Ig Nobel Prizes are unfortunately better known in Japan and Europe than in the U.S. He noted that it is particularly popular in Japan.

“Japan has an inordinate number of Ig [Nobel]s because their culture celebrates and appreciates [it]. There are several TV documentaries and even an Ig Nobel museum.”

A special exhibition introducing the Ig Nobel was indeed held in Tokyo for more than one month in 2018.

The difference in interest among countries and regions is reflected in the number of articles introducing the Ig Nobel Prize. Five pieces of the Boston Globe about the Ig Nobel were found on the Internet by Google search. It is not a large number, as you see in the table below. You may also imagine that the British and Japanese, as a whole, are more interested in the Ig Nobel than the Americans. 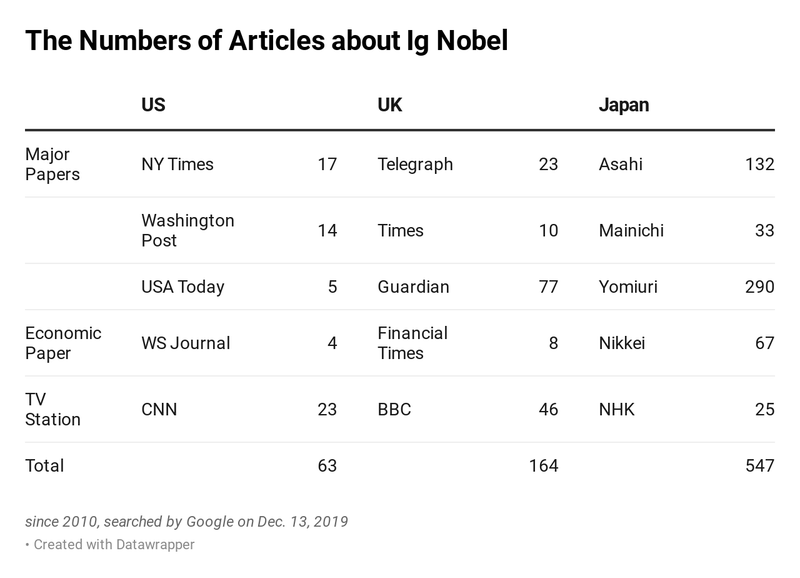 Akira Horiuchi, who is a doctor at Showa Inan General Hospital in Komagane, Nagano Prefecture, Japan, is one of those who enjoy the glory of the Ig Nobel Prize. He developed a method of examining the intestine by inserting an endoscope into his anus while sitting and won the 2018 prize in medical education.

“I am still only a doctor, but major pharmaceutical companies have started to treat me as a professor. My hospital has come to be known nationwide. Komagane residents were proud that even rural people could be a national topic,” Horiuchi wrote. “There is only one problem. People have been checking my behavior, and I can’t even have an affair.”

It is important to note that some research that seemed out of this world went on to change the world. Einstein’s fantasy spawned relativity theory, which made nuclear power and the Global Positioning System possible. The basis for the technique of genome editing that is certain to win the Nobel Prize is the discovery in 1986 of a repeat of the same sequence in certain parts of the DNA of E. coli. No one at the time thought the discovery would be of any use.

Scientists share a common belief that research that seems at first glance useless should be valued. In 2016, Nature, a British science journal, argued in an editorial entitled “Agencies must show that basic research is worth the investment”:“In democracies, politicians have to demonstrate to their electorates every five years or so that they have presided over serial successes and have not thrown away taxpayers’ money on self-indulgent frippery. The scientific community has to find ways to continually show them that it is producing some of the successes.”

Marc Abrahams at his editorial office (and his home)

But there are more pressing and practical reasons for Abrahams to lament the Bostonian's indifference to the Ig Nobel Prize.

Despite its reputation, the Ig Nobel is run by a tiny organization staffed with volunteers. Abrahams’s magazine has a few hundreds of paying readers, so to make a living, he needs to earn money by giving talks and contributing to other media.

The annual Ig Nobel ceremony costs about $50,000. Revenue from ticket sales cover the cost, but it’s not enough to pay the airfare for the international winners. To save money, Abrahams asks winners to stay at volunteers’ houses.

“We had always hoped that we would be able to get organizations to give us money, but that’s been very difficult for us to do,” Abrahams said. “For sponsors, you need to have local attention. Any organization around here probably does not know [Ig Nobel] exists.”

I emailed David Dahl, the deputy managing editor at the Boston Globe, and asked about the reason why they don't seem to be very interested in the Ig Nobel.

Two weeks have past. No reply yet.