Press tour around the exhibition hall

ROOTS & ARTS SHIRAOI started on October 15th (Friday). On the first day of the exhibition, a press tour was held for the media such as newspapers to visit each exhibition hall by bus and explain the works. Mei Nakada, a writer who participated in the tour, reports!

The first place we visited was the former Shadai Elementary School, which moved about 5km northeast along the sea from the city center of Shiraoi on Route 36. It is a location where you can see Mt. Tarumae very well!

The sculptures by sculptor Minami Yoshida are set up on the grounds of the elementary school as if looking at Mt. Tarumae. Yoshida has been conducting research such as actually climbing Mt. Tarumae and sketching Mt. Tarumae with clay from the former Shadai Elementary School when creating the work. The sculpture expresses the universal beauty of humans and nature, modeled on three women who live powerfully.

In addition, Teruko Mitsuoka, a poet representing Shiraoi, also wrote in the songbook "Hinoyama", overlapping herself with Mt. Tarumae. It is a work that is superimposed on the figure of Mt. Tarumae, which was expressed by Teruko Mitsuoka in a song, with a strong patience. 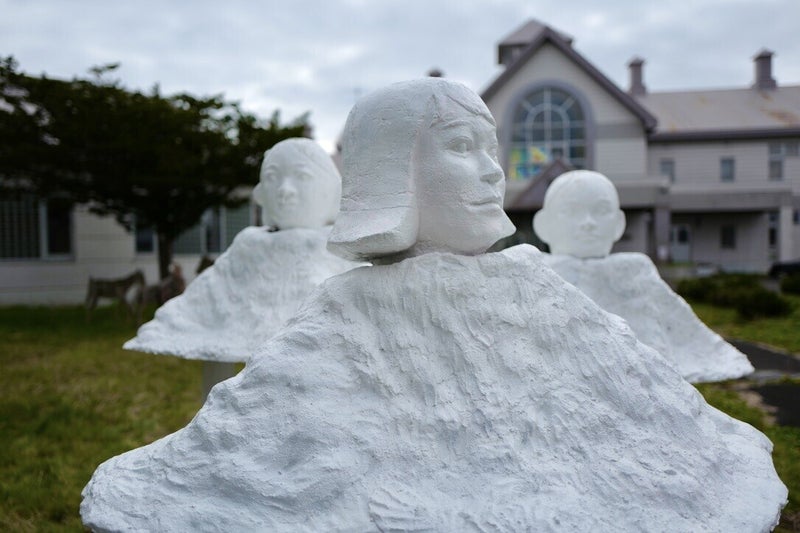 Next, we moved on Route 36 in the opposite direction (Noboribetsu direction) to the Takeura area, and went to the antique shop Route 36 Shiraoi. Yoshida's work is also exhibited here.

The first thing that pops into your eyes when you arrive is an illustration of a girl drawn on the outer wall in a big and fun way. This is a mural painted by Yoshida when she was a high school student when the antique shop Route 36 Shiraoi opened, and the owner liked it for a long time. 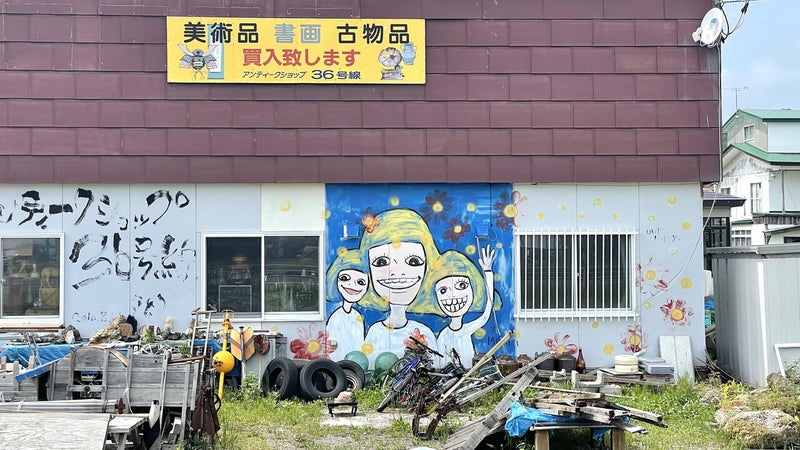 Antique miscellaneous goods are lined up everywhere outside and inside the store. Everyone was surprised at the number of them, "How did you collect so many !?" You will want to take your time and find your favorite item. 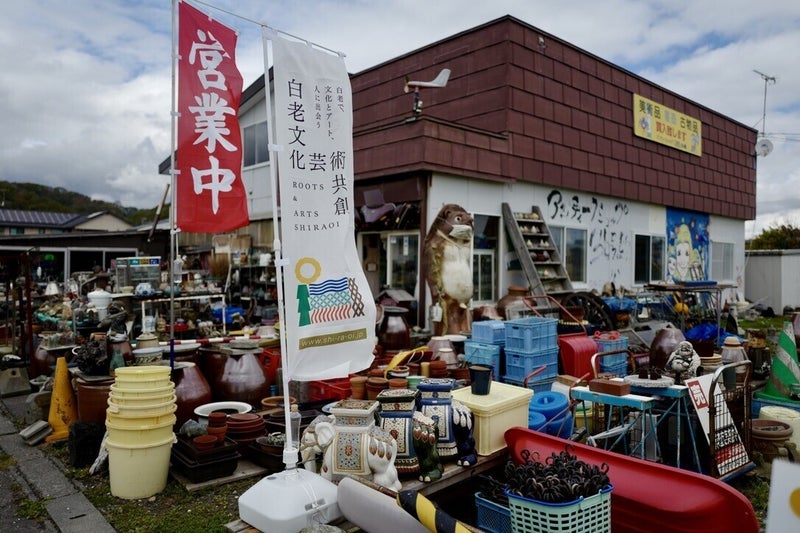 As I entered the store and walked through the store where antique miscellaneous goods were displayed, paintings depicting the faces of many children were displayed on the wall of the atrium. This work also contains the wish "I want you to live as powerfully as Mt. Tarumae." 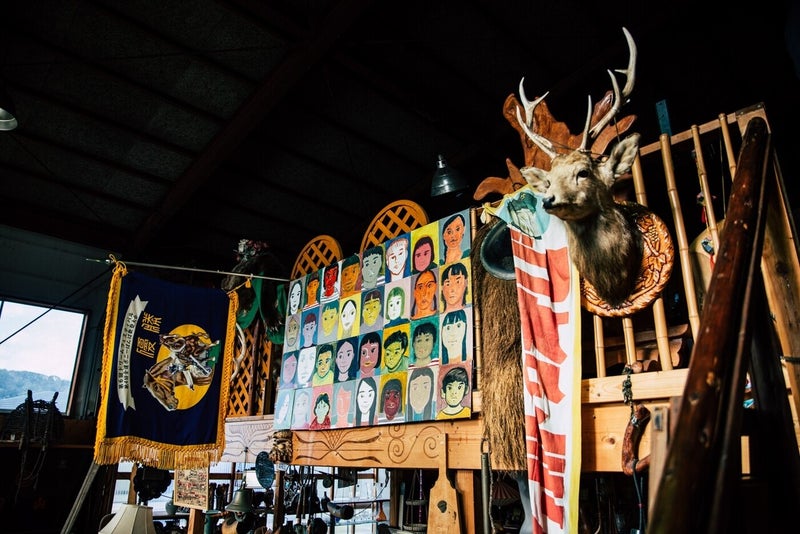 Yo Onishi's “Elements of Charcoal” Relationships in Between No.2

Next, we visited the Bubetsunomori Campground. It is about 4km from the city center, a little towards the forest along the Bubetsu River. It is a popular campsite that many people visit on holidays.

Overlooking some of the wooded areas of the campsite, you can see that cotton cloth with patterns is wrapped around the trees, and charcoal is bundled like a tipi and placed in several places. 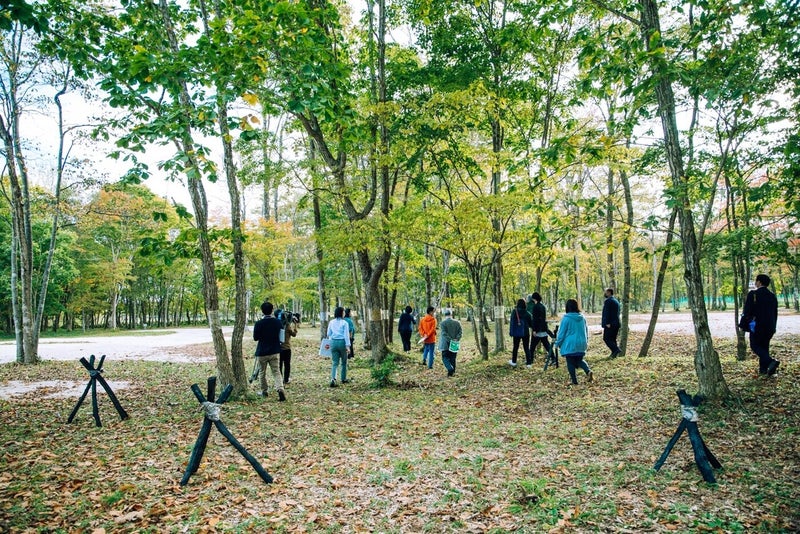 This is the work of Yo Onishi. His theme this time is "charcoal." Shiraoi is an area where charcoal burning is popular, with traces of charcoal kilns from the Meiji era remaining and still producing charcoal.

Onishi has noticed during his research activities. Some organic patterns such as stumps and annual rings drawn by the "tree" ,that is the source of charcoal, overlap with the swirling Ainu pattern. Trees are curved with swirling trunks and branches, and are slightly out of perfect symmetry. And the Ainu pattern also has a natural distortion made by hand, not the perfect symmetry that is made by machine. He wondered if the fluctuations had an effect on the familiarity of the Ainu pattern.

So, this time he used charcoal to draw a pattern extracted from nature. "Carbon", the element that makes up charcoal, is also a component of our body, and humans exhale carbon dioxide. In addition, people use wood to cook and draw pictures with charcoal in their daily lives, and the material used is wood. It is also the role of trees to convert the carbon dioxide contained in our exhaled breath into oxygen.

In this work, he expresses that carbon is circulated and balanced between people and trees, and that nature and people are connected. 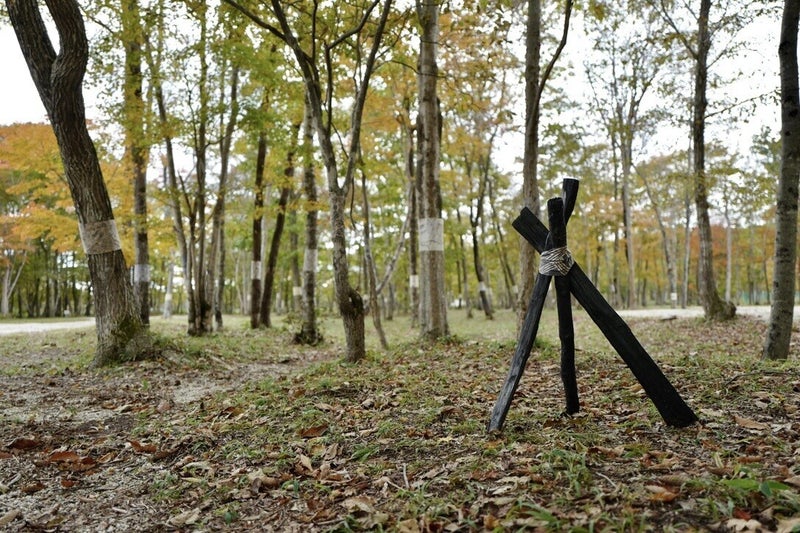 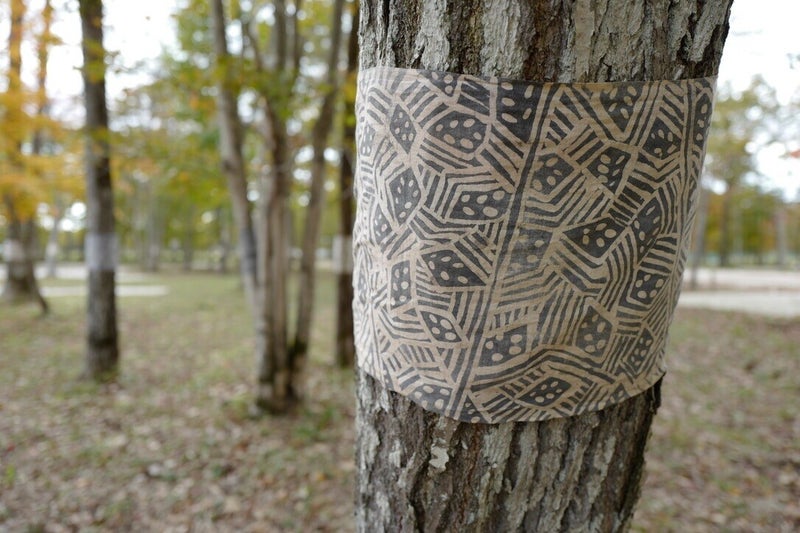 The bus returned to Omachi, Shiraoi's city center, and headed to the site of the vacant tenant "Creative Isshin" next to the Shiraoi Post Office.

Here, a large illustration with a motif inspired by the Ainu pattern welcomes you. Colorful line drawings and cloths are applied everywhere on the walls and floors of glass-walled buildings, making them vivid to the eyes! It is the work of Mitsugu Aikawa. 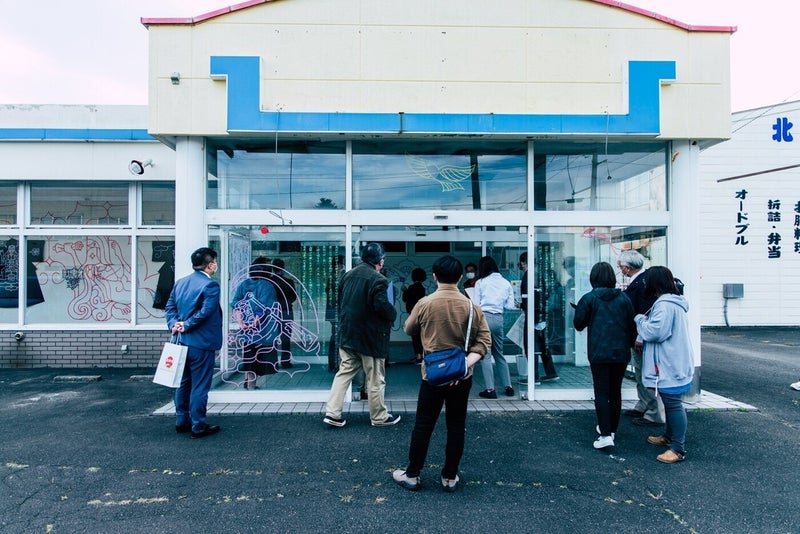 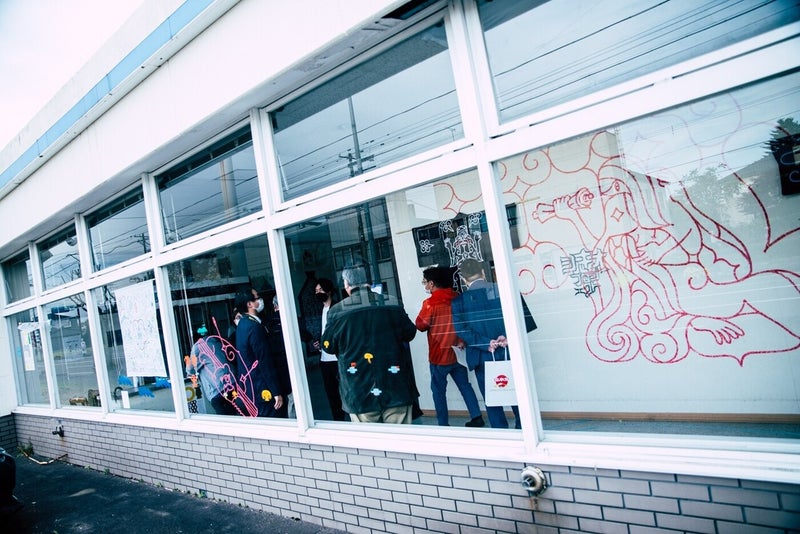 Aikawa created an exhibition space like a picture scroll based on the legend of Yoshitsune that remains in the history of Shiraoi Town. While Minamotono Yoshitsune was away from the Ainu chief, he stole the scroll by telling the daughter of the chief who was an answering machine. The Ainu characters were written there, so the story is that the Ainu characters have disappeared. Aikawa's original imagination is added to it.

When you enter the building, the story of Yoshitsune's legend is written in letters on the wall of the elongated passage, so you can see the works after reading and understanding the story. At the venue, in addition to freehand line drawing illustrations that express the story, collaboration embroidery works with Shiraoi's embroidery circle Futch Korachi are also exhibited, and you can enjoy the legend of Yoshitsune in various ways. 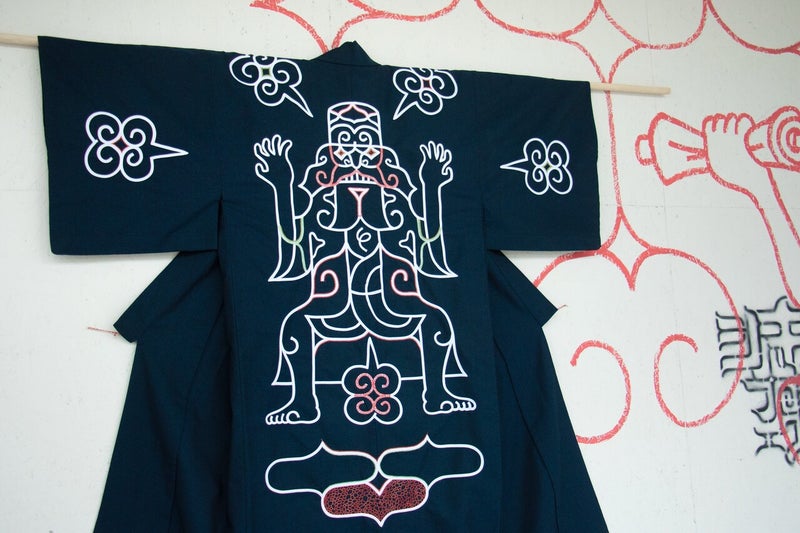 After leaving the site of "Creative Isshin", we went to cafe Yui in Omachi shopping district in about 4 minutes on foot. Cafe Yui is a very fashionable cafe, and its particular interior is like a small gallery.

Morisako's "The Binding of Drawing of Shapes and Shadows" is displayed in a cute space of cafe Yui.

Morisako has been associated with Shiraoi for more than 10 years, counting from his participation in the "Tobiu Art Festival". In the past, he used to create works on big themes such as legends and folklore, but this time he focused on familiar topics. The pieces of a small story, such as conversations with people he met in Shiraoi and leaves he met on the roadside, are expressed as many small pottery, and are scattered around the cafe. 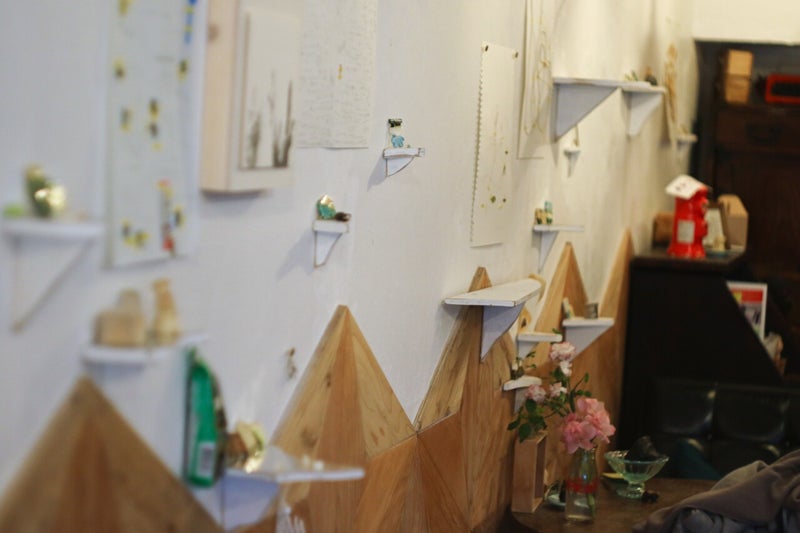 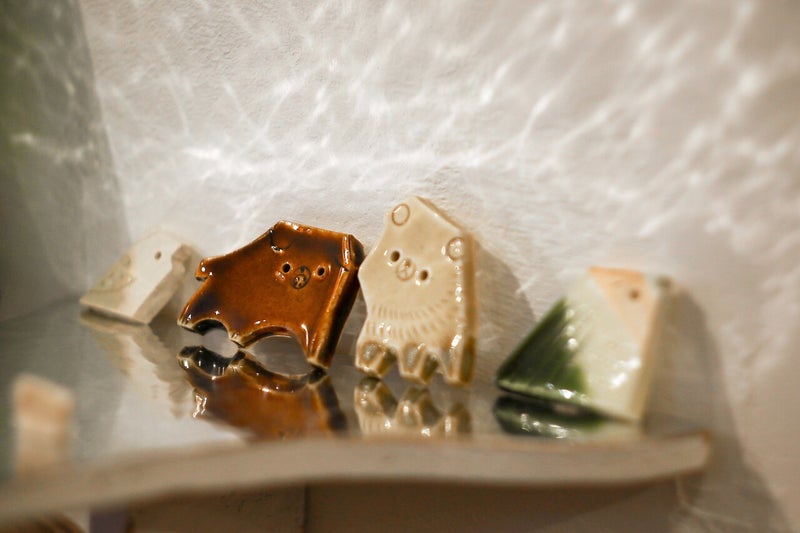 And, about 3 minutes walk from cafe Yui on Omachi shopping street is haku hostel + cafe bar, which is Morisako's second venue.

The silkscreen work exhibited here is “A Map Bigger or Smaller". Small illustrations are drawn tightly on a large cloth. This is a collection of pieces of each small story exhibited at cafe Yui and expressed on a piece of cloth as a big story. 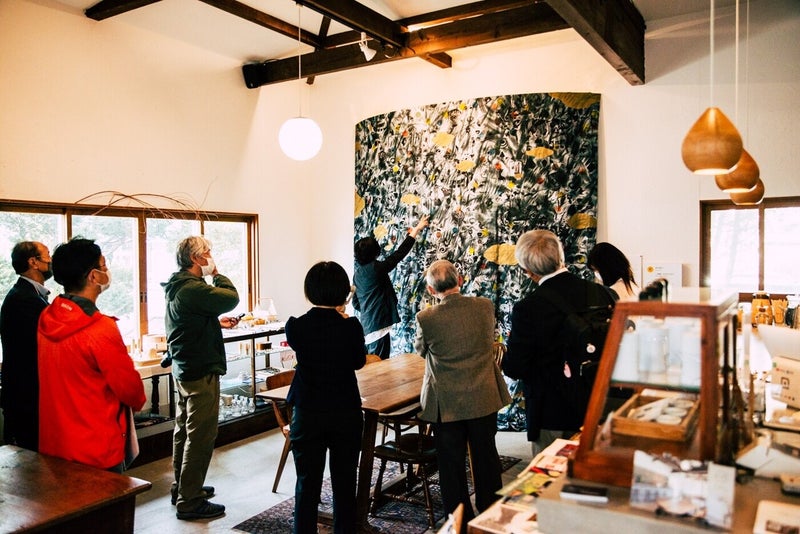 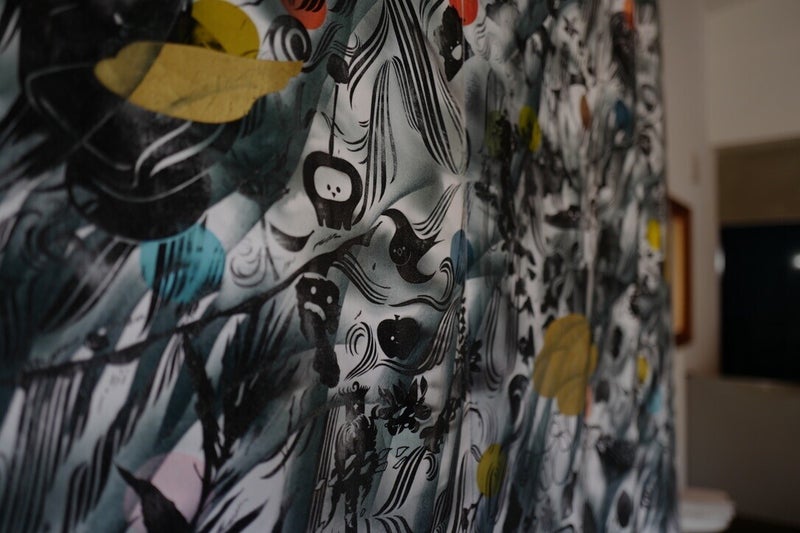 In both of the two venues, I couldn't help but say "Cute!" If they were sold as souvenirs, they were all so good that I would definitely want to buy them.

Michika Isozaki's "Going into the forest, going out of the forest - but perhaps doing neither"

Then we visited Yamamoto rental office in Omachi shopping district. It is a rental space, sandwiched between "Bakery Shop Nanakamado" and "Fruit Studio Shiraoi".

When you arrive, the work that expresses the entire building is a masterpiece even from the outside! Tree branches and leaves come out dynamically from the window, and it is exciting even before entering. 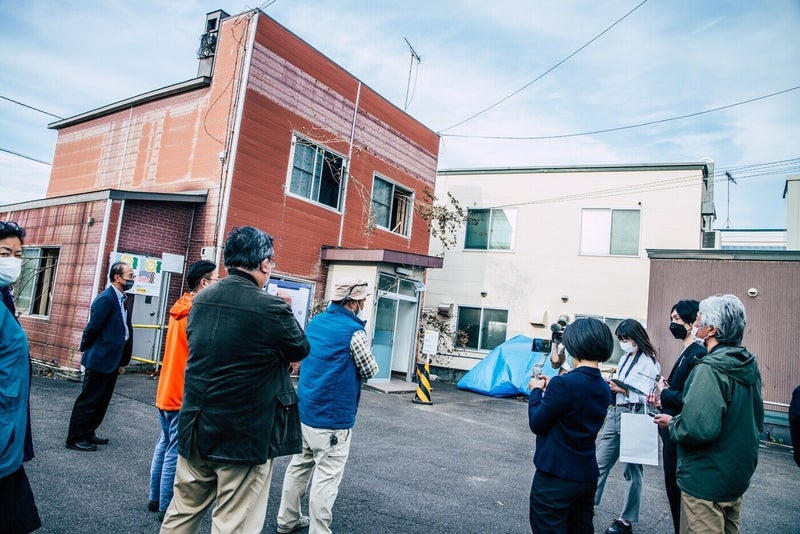 Isozaki actually walked along a river in Shiraoi and conducted research activities in order to understand the land of Shiraoi. He traced the trajectory of a gold dust digger who once climbed the river to collect gold dust. 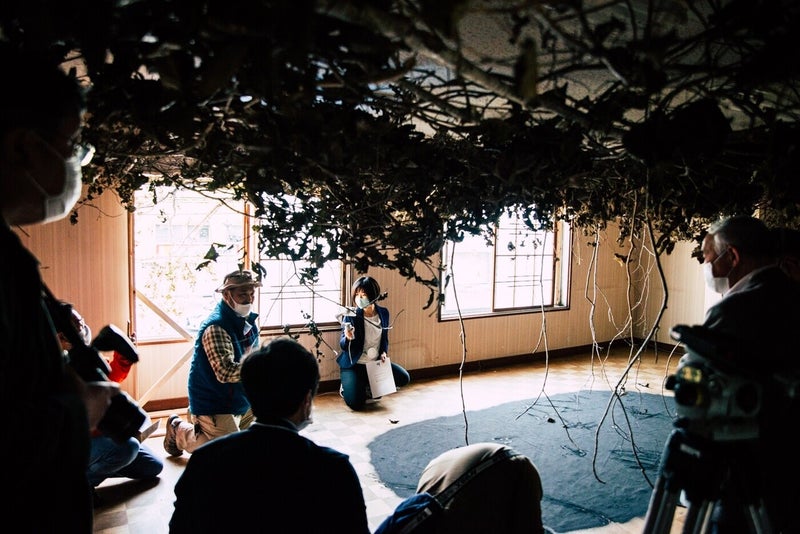 I was excited even before I entered the building, but the works inside the building exceeded my expectations, such as expressing gold dust digging using materials such as iron sand!

* Isozaki's "Going into the forest, going out of the forest - but perhaps doing neither" ended on October 24th (Sun).

Next, it is about 1km from Yamamoto rental office to the Shiraoi creative space "Kura".

At "Kura", the materials of the workshop "Hascup to Campagne", which is another program of Isozaki, are exhibited. At the workshop, together with the participants, he will make homemade natural yeast from the fruit tree "Huscup" that grows naturally in the Iburi area of Hokkaido, and bake the hard bread "Campagne" from it. You can smell the homemade natural yeast of the fermented and growing, and see the real olive oil with campagne and herbs. 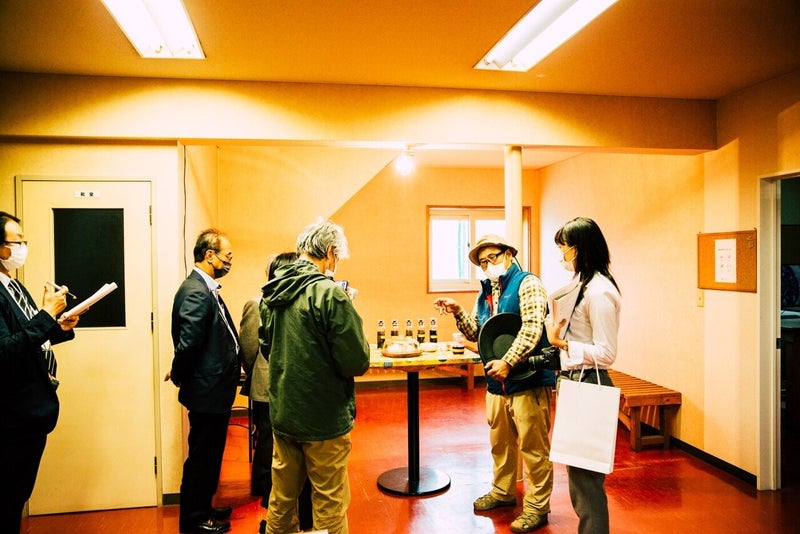 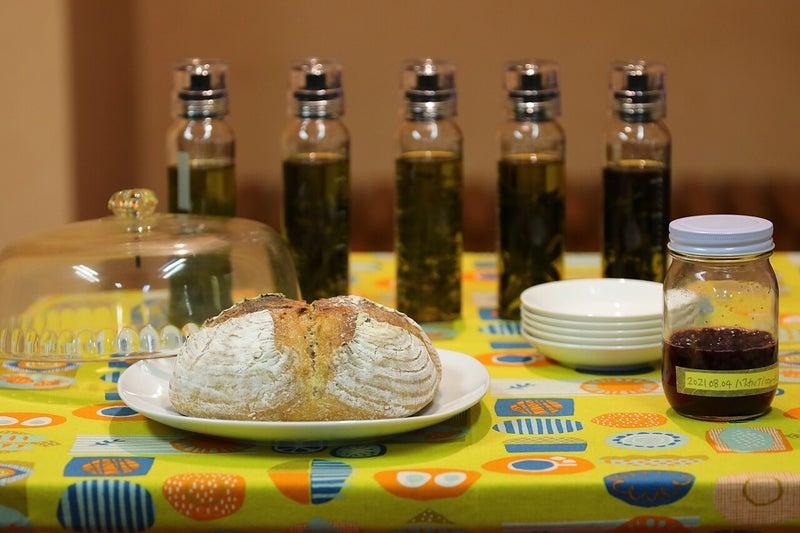 You can also see a video of the process of fermenting haskap to become natural yeast, and it is interesting to see how it ferments with a small noise!

Next to Isozaki's venue in the Shiraoi creative space "Kura", the poetry works of the poet Yumi Fuzuki are exhibited in readings and videos.

Teruko Mitsuoka, the great-grandmother of Fuzuki, is a poet who represents Shiraoi. She stared at silent objects such as nature and left behind many songs that superimpose their existence and human activities. Fumizuki visited Shiraoi, scooped out the universality of Teruko Mitsuoka's tanka collection "Hinoyama", and wrote a new poem for modern people in the form of answering "Hinoyama". 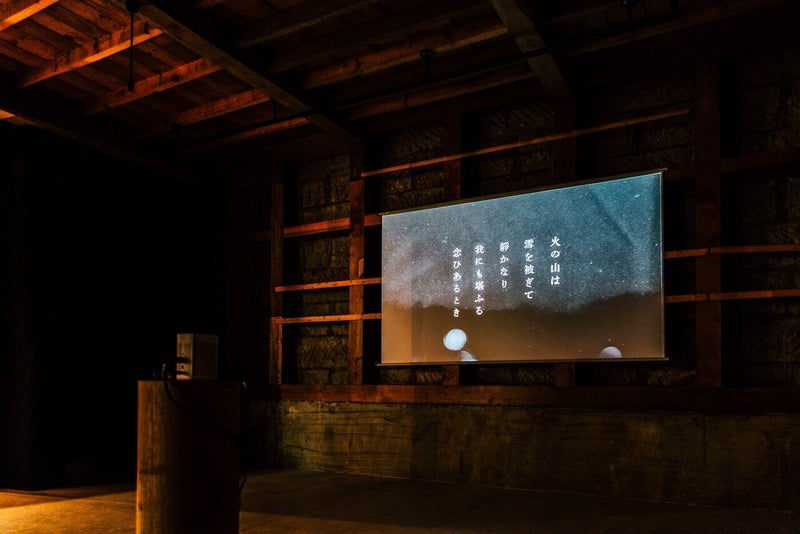 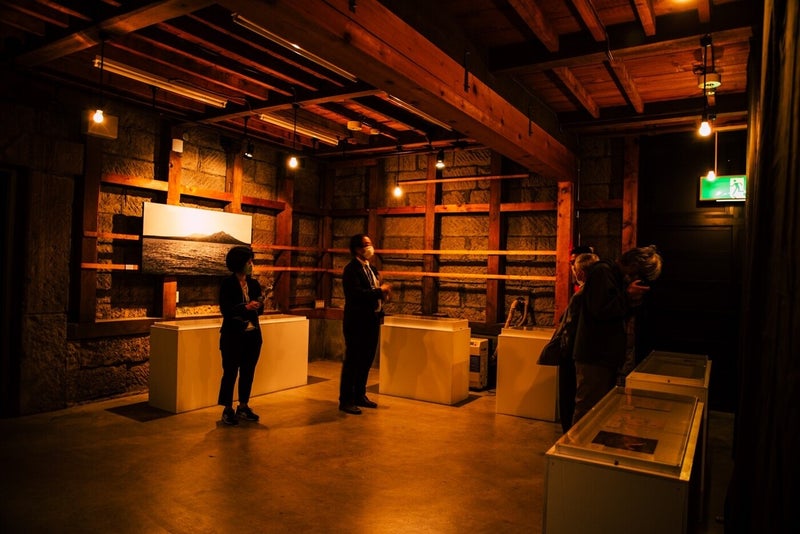 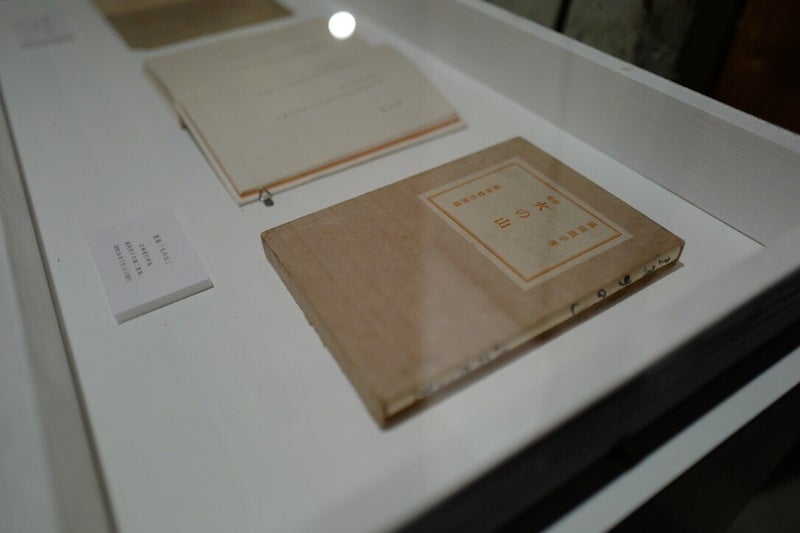 This Sirkio Project is planned while feeling the view of nature and the scenery of Shiraoi expressed in Teruko Mitsuoka's song (especially "Mountain of Fire"). Feel it in each artist's work.

It is also recommended to go around each venue while reading Teruko Mitsuoka's song written in the booklet of the Sirkio Project and discover the connection between each work and Teruko's song!

<Outline of the event>

■Yo Onishi
Instagram @yoonishi_illustration
“Elements of Charcoal” Relationships in Between No.2
Venue: Bubetsunomori Campground (110-2 Ishiyama, Shiraoi-cho)
Time: 11:00-16:00 Open every day

■Mitsugu Aikawa
Instagram @aikawamitsugu
"The Stolen Letter"
Venue: Unoccupied tenant "Creative Isshin" site (3-4-11 Omachi, Shiraoi-cho)
Time: 11:00-17:00 Open only on Fridays, Saturdays, Sundays and public holidays * You can see through the window on weekdays and after hours.