Day 1: How investors view WOVN’s growth ~ From a service that no one could pronounce to raising 3.6 billion yen in funds ~

A WOVN Investor Day was held in September 2021.
At this discussion-type event, investors talked openly about how they viewed WOVN from their position as supporters of the company. Day 1 and Day 2 featured different guests.

The guests we invited on Day 1 were Incubate Fund’s (IF) Mr. Homma, who was the first person to invest in WOVN and who has run alongside us for seven years, and the lead investor of the company fundraising in 2019, Mr. Murata from Eight Roads Ventures Japan (Eight Roads).

In this article, we’ll discuss the happenings of Day 1, minus the portions that were too scandalous to share. 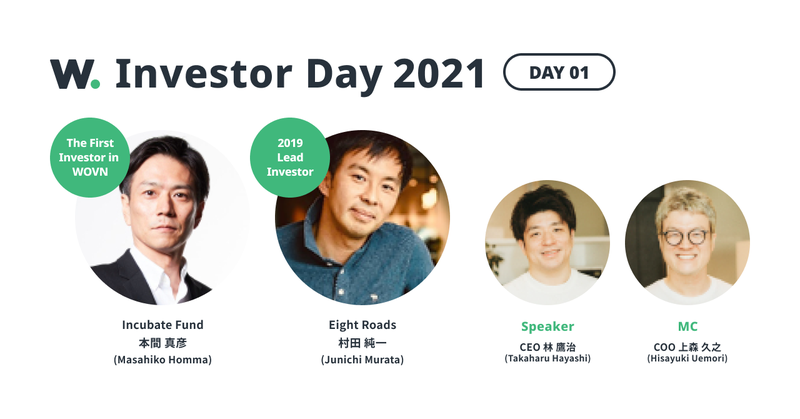 Entrepreneurial engineers are rare. They might event boost Japan’s economy?

Mr. Uemori (the MC for WOVN)
Mr. Homma and Mr. Murata, thank you for joining us today!
I’ll dive right into the first topic. Could you share how you came to know about WOVN? 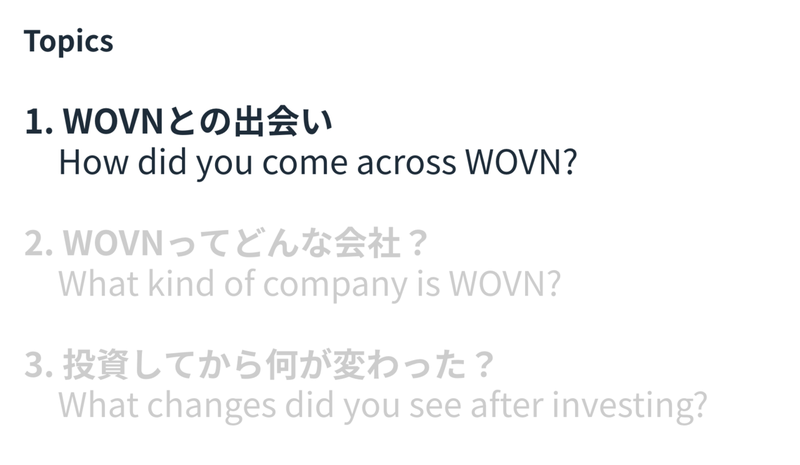 Mr. Homma (IF)
I invested in the company right when Mr. Hayashi was starting it up, and I went to meet with him because I thought it was interesting that an engineer was starting a company, since that was rare at the time.

When I inquired further, he talked about wanting to “apply Optimizely (an A/B test tool for websites) to this field.” The terms SaaS and MRR didn’t exist yet, and I legit had no idea what he was talking about.

Mr. Hayashi’s tune is still the same today, and the times have finally caught up with him. Back then, he just stuck out in the wrong way. (laughs)

Mr. Homma
Plus, you set up a tent in your office, right? That was ahead of the times. It gave you a west coast feel. A lot of startups are doing that now though, huh?

Mr. Hayashi
Outdoor gear is cheap but sturdy. And back then, I slept at the office sometimes, so just having a tent made things all the more fun. 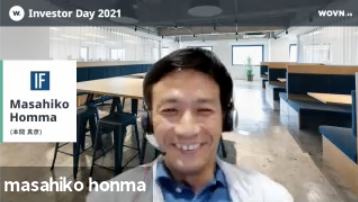 Mr. Murata (Eight Roads)
Because of my job, I check a considerable number of company websites, including those from abroad. Probably more than people realize.
I happened to see the “W.” logo at the bottom right-hand side on multiple websites and started wondering what it meant.

I later participated in Incubate Fund’s event and when Mr. Uemori was giving a presentation on WOVN, I thought “That’s it!” And we finally got connected.

I’d always thought that business was about eliminating hassles, like Amazon removing the need to search through a bookstore, and Suica letting you just swipe without needing to buy a ticket.

When I heard about WOVN, I thought that website localization would be full of hassles. Like creating mirror sites for different languages.

Japan is a wonderful country, but it lacks in the area of disseminating information. Opportunities are being lost out on. While listening to a passionate presentation about WOVN, I thought that if the hassle surrounding dissemination could be removed, this could help boost Japan’s economy and society overall.

Mr. Uemori
Companies go through an investigation before being invested in, and I remember you were very interested in understanding our business model. To the point where you were becoming more knowledgeable about the industry than we were. 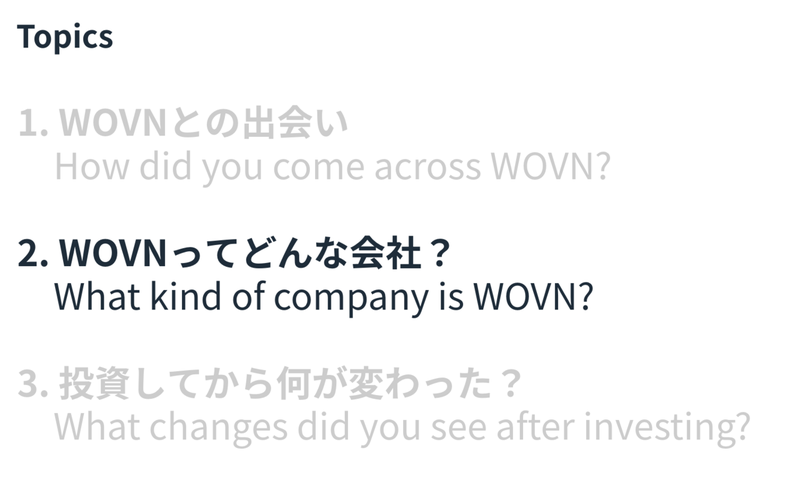 Mr. Uemori
How do you two see WOVN? I’m sure Mr. Homma has looked at hundreds of companies.

Mr. Homma
One thing I like about WOVN is how aware you are of things.
Making sure to hold onto ideas like “We have to make products with this mindset.”

Startups in Silicon Valley that grow tend to be known for balancing short and long-term goals, and while WOVN understands covering costs with enough sales, they also change out their platforms at a fast pace and strengthen their technological base with a long-term mindset.
I think it’s great that you have a long-term vision.

And a lot of foreign investors are interested in you!
When I talk about WOVN, they respond with something like “How interesting! I’ve never heard of a SaaS like that!” It's easy to convince people that WOVN is functioning as a part of Japan’s infrastructure because WOVN has a lot of major Japanese companies as case studies.

And the management team is close-knit. I’m not sure if the members themselves think so though. (laughs)

Mr. Murata
WOVN is really a tech-driven company.
Mr. Hayashi’s profile mentioned that he’s an ex-engineer, but it’s rare to see a business led by an engineer succeed.With the team centered around Mr. Uemori, he plays a similar role to that of Google’s Eric Schmidt.

In addition to being led by an engineer, the service can also be used as a full-on platform. One unique thing about your business is the potential to permeate all facets of Japan’s economy. It’s interesting that you have both technology and potential.

You cover all the areas of society - B2B and B2C - for both internal and external users. Once the city becomes more digitalized, you could also target offline areas. You might not be particularly flashy, but you’re a business that can go after a vast territory, penetrating all levels of society.

You have a peculiar mixed management style, are super tech-driven, and have a wide range of business potential. Did I compliment you too much? (laughs)

Mr. Uemori
I’d love for you to compliment us more, actually. (laughs)

Mr. Murata
Put another way, if everyone has these expectations, it’s bound to become a grand adventure.
Just handling the issues right in front of you can be tough, but as WOVN begins to permeate throughout society, I feel like the forefront of your potential continues to expand.

Mr. Hayashi
I think it’s just like you said. Thank you! 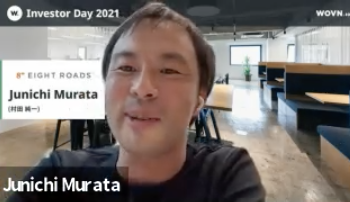 The concept has always been the same. Coming to represent SaaS startups. 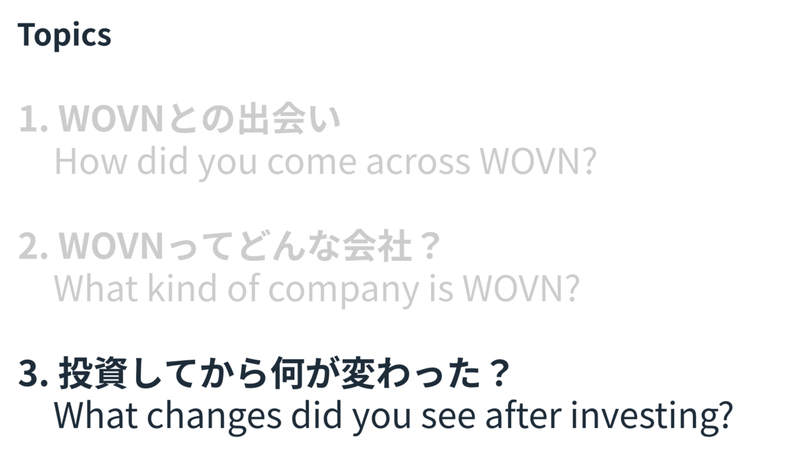 Mr. Uemori
The next question is: Have you seen any changes in WOVN since you invested? Mr. Homma said he forgot partway through. (laughs)

One thing that hasn’t changed though is Mr. Hayashi.
I’ve looked at a lot of businesses, and most of them pivot after seven years, but WOVN has continued to provide the same product for the same solution this entire time. Mr. Hayashi’s initial concept had substance, which I think is amazing.

Mr. Murata
I think that WOVN’s rank within the startup ecosystem has gone up considerably. It could definitely represent Japanese startups with how interesting the business is and how talented the people are.

WOVN needs to keep moving forward, but I think you all can be proud of overcoming issues and making it this far.

Mr. Uemori
Things have been progressing steadily, haven’t they.
We might not notice it within the company, but is WOVN becoming a well-known name around the world?

Mr. Homma
It definitely is when it comes to SaaS.
Only a limited number of companies have this level of MRR, and even though you’re still in the growth phase, I’d say you’re at the top in terms of quality.

Many people told me they couldn’t pronounce the name of the service before, but becoming a popular company has solved that problem. They can say “WOVN” now. (laughs)

Mr. Hayashi
We’ve always been told the name was hard to understand. We actually wanted to name the company “i18n,” but Mr. Homma vehemently disagreed with that idea. (laughs)

The product stands out instead of the president

Mr. Uemori
Time is winding down, so lastly, I’d like to answer some questions from the members.
What kind of person is Mr. Hayashi?

Mr. Homma
His way of thinking is typical of an engineer. He also starts from scratch when thinking about organization, business, and fundraising. Even if I tell him, “Other companies are doing it this way,” I love that he thinks things through, asking whether that style fits WOVN, or if WOVN should do things the same way.
But that takes quite a bit of time. (laughs)

Mr. Hayashi
So that’s how you see me. (laughs)
My style is to “do things over 60 years,” so I want to execute things with certainty, even if it means it’ll take a while. It takes time to mesh other peoples’ ideas into your own, which may be why it’s taking time to see the results.

Mr. Hayashi
And I try not to stand out as the president. I want people to be curious about who WOVN's president is.

Mr. Murata
That’s amazing. The name of the product is more well-known than that of the president.

Mr. Hayashi
That’s what I’m aiming for! Especially since I don’t like standing out. It matches my core personality and ideals.

Mr. Uemori
Sorry to butt in when everyone’s having such a good time. Mr. Homma and Mr. Murata, thank you again for today!

Mr. Hayashi
You gave us a lot of compliments, but we’re going to stay humble and keep doing our best! Thank you very much.