【Event Report】 Members of the cast of Shojo Kageki Revue Starlight took part in an online shopping promotional live stream, taking on ridiculous challenges! Perhaps some mystery about the merchandise for sale even came to light! 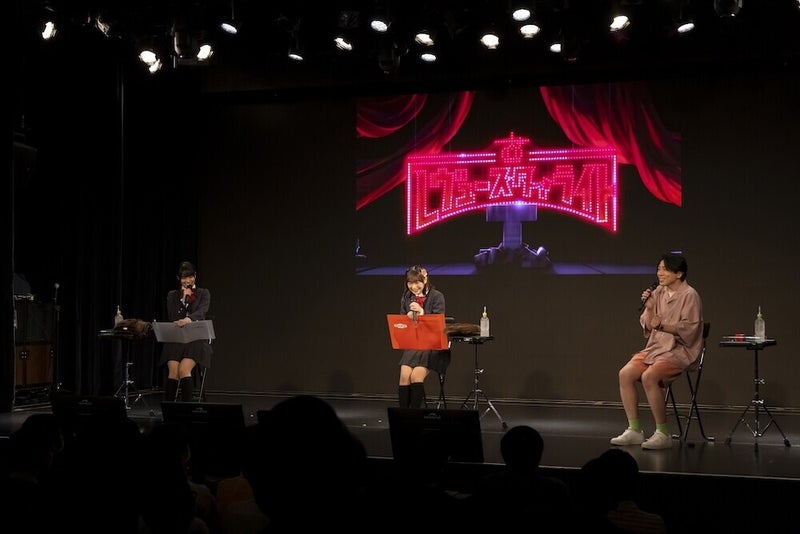 In celebration of the 11th anniversary of the opening of the PONY CANYON anime merchandise shop canime, the cast of many of its anime series took part in the "canimesse" program on September 12th, to highlight the latest canime merchandise. The landmark first broadcast featured appearances from the talent behind the "Shojo Kageki Revue Starlight" anime, Momoyo Koyama, Maho Tomita, and director Tomohiro Furukawa. Besides the live broadcast on YouTube, 150 lucky members of canime Prime won the chance to watch the event in person, taking part in all kinds of events followed by an autograph session at the end, which all made for quite a special evening. 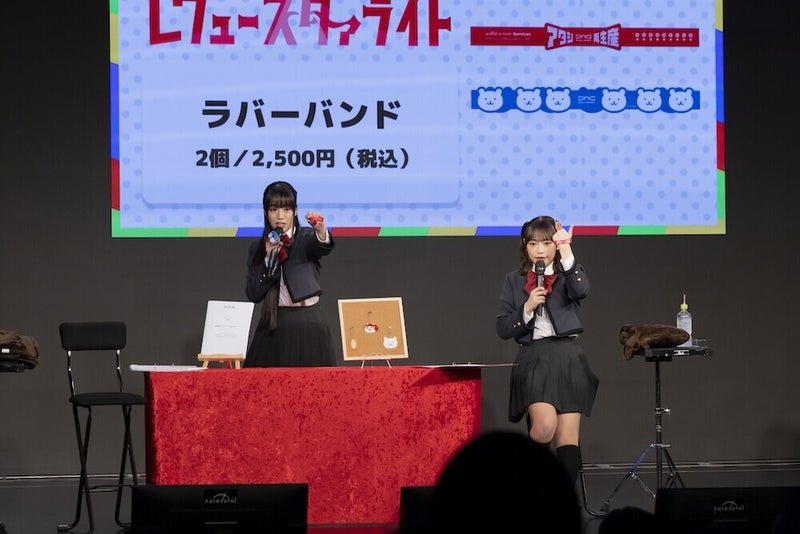 The canimesse Shojo Kageki Revue Starlight event began with Koyama and Tomita calling out the title of the series to a huge round of applause before emerging onstage dressed in Seisho Music Academy school uniforms. From the stage, they asked how many in attendance has been to see last year's "Shojo Kageki Revue Starlight" theatrical movie, and determined the level of "Starlight love" in the audience. The first stage event was "Shojo Kageki Revue Starlight: The Movie: That Certain Scene," with the movie's director Furukawa serving as the MC. Koyama and Tomita looked back on their favorite scenes, tearjerking scenes, and more, and discussed many scenes in-depth, an invaluable experience for the fans. They revealed that their excitement during the live broadcast of the September 9th (9/9) event "99-Gumi Day! Let's Watch the Starlight Movie Together!" at the scene when Hikari Kagura and Karen Aijo say "they've already started entering the theater," and how they tried changing the position of the girls themselves, saying "if I were a 'real stage girl' then I'd be so flustered by this". They answered Furukawa's question "have you ever experienced that in real life?" with a "no, we haven't!", but let slip the secret that some of the cast members had gotten the entrance time wrong in the past. 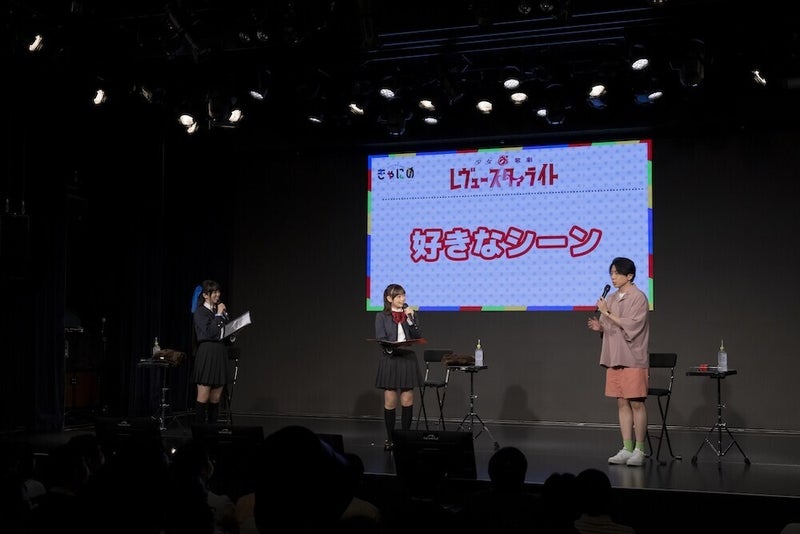 Moving on to the "canime shopping" portion, the latest limited-edition merchandise available only on canime was introduced. As Koyama brought up each new item, Tomita showed off each one and entertained viewers with her expressive gestures. When the Gekijouban Shojokageki Revuestarlight Orchestra Concert Score was introduced, she held the unbound versions of the sheet music in both hands and used them to play peek-a-boo, unveiling her hidden talent as "Tomita of 100 Faces." When trying to introduce a set of rubber wristbands, the same as those which would have been bonuses for Starlight Seat ticketholders at the unfortunately cancelled "Starry Session" live band concert, Koyama got big laughs as well when the wristbands she had put on ahead of time got stuck to her clothes and wouldn't come out. Cute and unique merchandise items came one after the next, including a set of three acrylic key holders, one of which is based on the "Kani-haniwa" character born from one of the director's doodles on a storyboard, a T-shaped metal keyholder in the shape of the center stage marking tape that's perfect for (in Koyama's words) pretending you're at Position Zero, and even a redesigned version of the Rubik's Cube that the director first had made as a gift for the production staff and cast. Additionally, it was mentioned that the members of 99-Gumi who got to preview the new merchandise unanimously reviewed it as "so cute~♡" 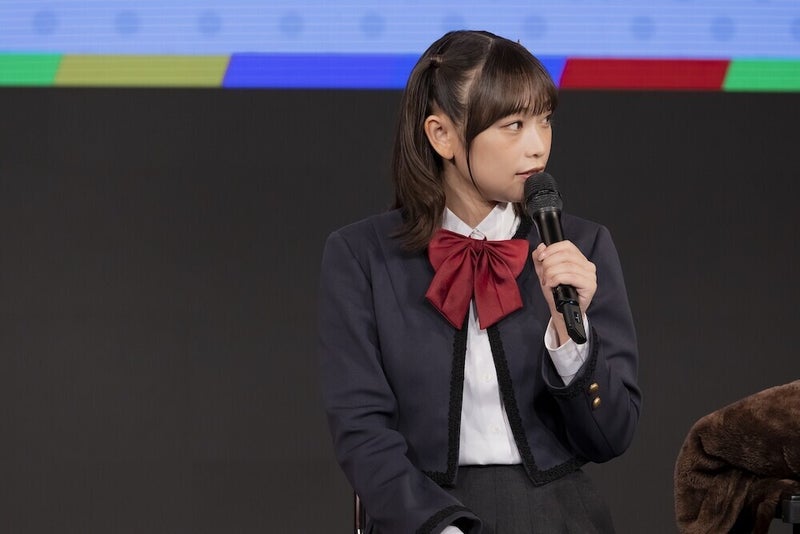 To further demonstrate the quality of the merchandise, Koyama and Tomita next embarked on ambitious presentations. No ordinary presentations, these were improvisational presentations along a theme, with the new goods as props. Koyama, given the theme of "on a deserted island" and the keychain set, performed this scene: "I'm so hungry... oh, it's a crab (kani[-haniwa])! Yum yum yum... Oh, and there's a bear... and a cat..." and acted out how she would use each one. In response to her spirited improv acting, Tomita responded "Moyo-chan, you really did a good job!" in praise. During this, Koyama knocked over a water bottle, but the superb physical skills cultivated through her onstage performances, she was able to catch it before it could spill! Director Furukawa was very impressed, commenting "That was amazing! Most people wouldn't have been able to react in time" as the audience joined him in applause. Next up was Tomita, using the pair of rubber armbands in an "on a date" scene! While showing up at the meeting spot with a matching armband on, she pretended to wait for her date while counting the Mr. White faces on the band. "It was like a very well-done nightmare," said Furukawa, commending them both on their performances as the impossible improv section ended in the performers' success. 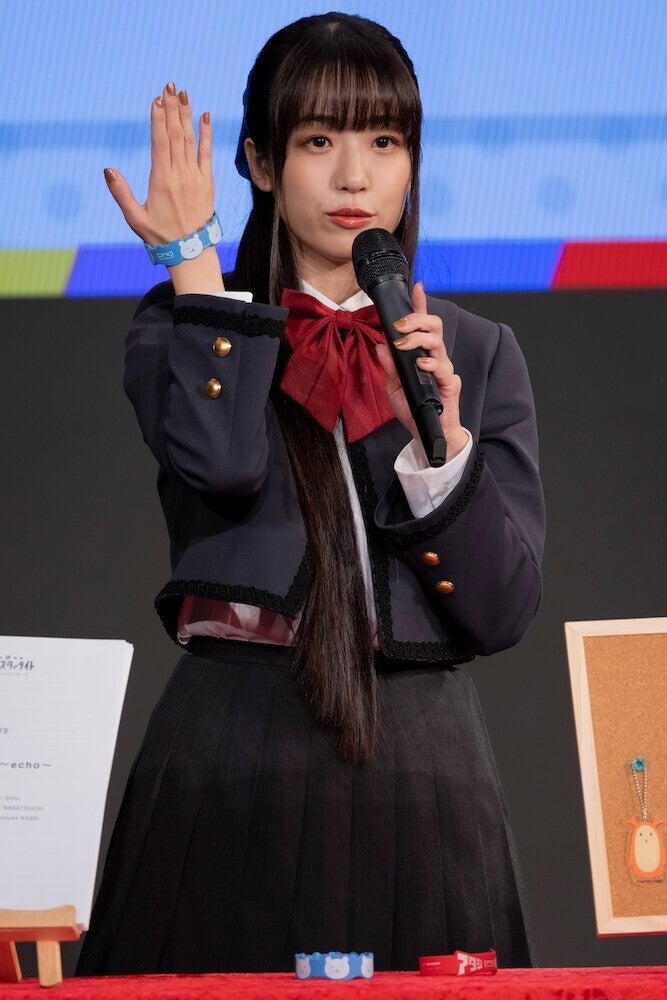 The hour-long program time seemed to fly by, and with the closing comments "There were so many items that were adorable and tugged on your heartstrings, and I hope they'll let everyone enjoy Starlight even more" (from Tomita), "If we get to do this next time, I'd love a set of home goods as merchandise!" (from Furukawa), and "All the Starlight merchandise is incredibly cute, and I'm going online to order mine as soon as I get backstage" (from Koyama), the event drew to an end. 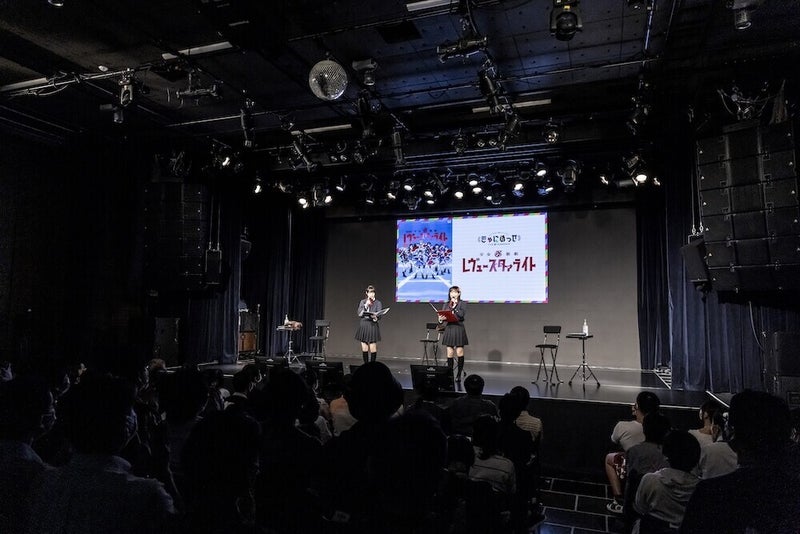 After the curtain fell, customers who came to purchase merchandise got to attend an autograph session as a special bonus. Koyama, Tomita, and Furukawa signed an autograph board for each attendee, who all got to come up on stage and enjoy talking with them (albeit through an acrylic barrier for safety) as they had their autographs signed. A super deluxe bonus like this could only be made available at the event, and everyone who attended is sure to have gone home happy.

The merchandise introduced in this program is now available on the PONYCANYON SHOP（https://shop.ponycan.com）for preorder. Order will be accepted until Tuesday, October 11, 11:59 PM Japan time, so for anyone who has yet to order, or is thinking about getting some of the new merchandise too, please consider placing your order today. As part of a limited-time campaign, the more goods you order, the more special bonus items you'll be eligible to receive along with them, so please see the PONYCANYON SHOP site for details. The archived video from this event can be viewed on the PonyCan YouTube channel（https://youtu.be/dSCDb_XqqUA）so if you missed the live broadcast, you can still check it out here.