The America-Japan Society in Tokyo has organized "America Bowl", a quiz competition for Japanese high school students to study English and American culture, since 2018. This program is originated from "Japan Bowl", in which  American students are tested on their knowledge of the Japanese culture and language.

This year, although America Bowl was canceled due to COVID-19 pandemic, AJS staff members and interns watched and cheered on the participating teams in Japan Bowl via live-stream on Friday, May 29, 2020.  This article is to introduce Japan Bowl to the Japanese audience and we hope this promotes U.S.-Japan mutual understanding.

Japan Bowl was created by the Japan-America Society of Washington DC in 1992. It tests students' knowledge of the Japanese language and their knowledge of Japan.

How did the Japan Bowl start?
It began with a remarkable woman, Jean Morden. She joined the US Navy during World War Ⅱ, and worked as Japanese translator. In 1955, her love and interest in Japan continued, and she received a Master's degree in Japanese language and literature. She taught Japanese to high school students, and wondered if there was some way to study Japanese more enjoyable. She came up with bright idea that having quiz competition, and she approached the Japan-America Society of Washington DC.
This is the beginning of the “Japan Bowl”.

Japan Bowl Around the World
As of today, six official Japan Bowls have been created, and they have joined with the National Japan Bowl to provide a network across the United States -- in California (Los Angeles), the Pacific Northwest (Portland), Utah (Provo), Illinois (Chicago), Wisconsin (Milwaukee), and Ohio (Columbus).
After creating more Japan Bowls across the United States, the Japan-America Society turned its attention overseas in 2014. Today there are Japan Bowls in twelve countries outside the US.

In the Japan Bowl, students first take a written examination. Those who pass the exam can join the Japan Bowl. This year, 29 schools participated in the Bowl. Winners and finalists of the Bowl are awarded a Japan Bowl Winner’s Trip to Japan. Last year, they stayed in Japan for 1 week, and visited Tokyo, Iawate and Hokkaido, enhancing their understanding towards Japanese culture, history and technique.

The Digital Japan Bowl Live streaming started with the America-Japan Society’s representatives’ opening speeches. Her Imperial Highness Princess Takamado, Honorary Patron of the National Japan Bowl gave a message to the finalists.  In the quiz session, the participants are divided into three groups (Level 2, 3, and 4) according to their Japanese proficiency. They answered the questions by discussing with teammates in a limited time. The styles of questions varied, such as reading texts or listening to conversation. The contents of the quizzes were also various, ranging from Japanese history to Japanese grammar. Although these questions seemed to be difficult to complete, such as answering a proper post-positional particle and Japanese art works, students could answer them correctly.

Questions for the final round
These are some examples of quizzes in each level.
Firstly, there is a quiz in toss-up round of level 2. Competitors listen to a Yamanote-line’s announcement and answer which side of the door will open.

In the individual round of level 3, Panelists have to make Japanese sentences using the idioms, such as “ki ga omoi(気が重い）”,”kubi wo nagakusuru（首を長くする）”. Students answered beautifully.

And the last one we would like to introduce is a quiz in the toss-up round of level 4.
The quiz is as shown in below.

This question seems difficult to answer even for Japanese people.  Although Japanese post-position (ha,ga,mo…) is hard for learners to understand and use correctly, students did a really good job.

Questions for fun
In Japan Bowl, they used famous figures, groups, or shows, such as Takarazuka (Takarazuka Revue Company) and Star Wars as the main topic of the questions. In America Bowl, we also would use those as one of the multiple choice answers not as a theme. In the end, both competition comes up with questions that sparks joy to high school students! 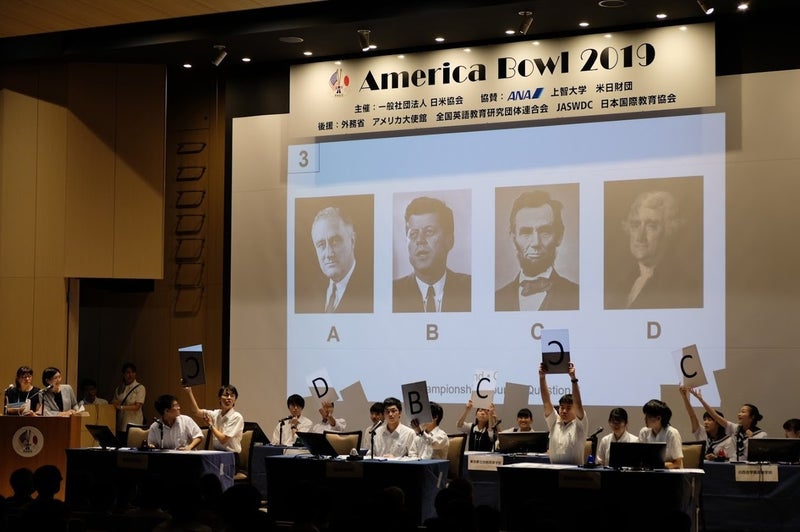 Both competitions have great atmosphere Japan Bowl used a robot character called "ROBO Kanji-kun" during the competition and in the end a mascot character cheered on the participating teams using a Japanese song. Also, the judge’s had a sense of humor that made the participants relax and feel at home. In America Bowl, we have a culture event during the break for participants to get to know each other while using English. Whether it is online or in person, both competitions are wonderful in their own way.

This year’s Japan Bowl was held online due to the spread of COVID-19. Coordinators tested many quiz engines and ran many trials to make this online event a success!
Since it was broadcasted live on YouTube, Japan Bowl was able to reach many viewers. Many viewers shared their answers in the comment section and interacted with other viewers, as well. The live broadcast is open to all viewers, so please go check it out!

There is a sister program to the Japan Bowl called the American Bowl, as we introduced before, in which Japanese students are tested on their knowledge of the U.S. This year’s America Bowl is cancelled, but please consider joining next year! We, as AJS staff and interns, will work hard to take what we learnt through the Japan Bowl to make the competition better than ever.