SE, could you explain to us what you do? - What is Service Enablement, the department working behind the scenes to enable the service departments?

What do these all have in common? Have you taken your guesses?

They all fill supporting roles where they remain out of sight to support their teammates who serve as the main characters, are tacticians enabling the main character to make maximum effective use of their weapons and finite resources, and are pillars that support the team behind the scenes and sometimes by stepping in with guidance, perhaps? (Slam Dunk's Uozumi was sent off after 5 fouls, so you may have the impression that he is "short tempered", but please forget that for now.)

Think of SE as an organization that replicates that.

Solving the mystery of what Service Enablement does

We sometimes get questions like "what are you?" and "what do you do?", so first of all, I asked a few people in the department what their impression of the team was. The following were their responses.

"It's a department that keep things in order. Its members are good at organizing things.”
"It’s a team that is indispensable. I feel that SE plays a very important role in the development of WOVN’s teams. Outside of supporting the service department, the team also makes internal arrangements in coordination with external parties, so it’s an irreplaceable team.”
"Its members are good at coming up with ideas to collectively solve distinct and individual issues.”
“It’s a team that has a lot of impact despite the lack of awareness regarding what it does. The team makes a lot of work easier.”

(It’s great to hear so many compliments!)

The service department is made up of teams that provide functions including customer onboarding, customer success, customer support, and localization.

There is a concept known as “Sales Enablement.” It is a concept that is becoming increasingly common and what it refers to is the function of creating an HR system which raises up successful salespeople. Generally, the emphasis is put on talent development, but WOVN's Service Enablement has a slightly wider scope. Service Enablement is actively working to create an environment that enables service departments to take action and work comfortably. 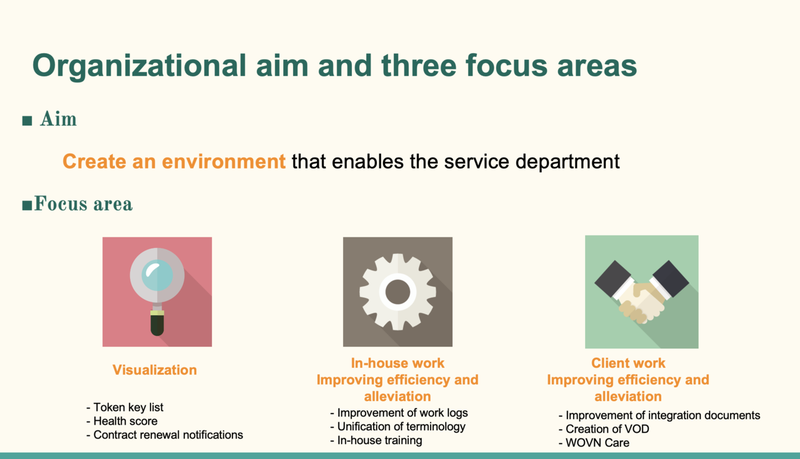 Onboarding, training of future leaders, visualization of health scores, systematization & improvement of operational support, accumulation of technical knowledge, and management & support of integration projects.
SE's activities are diverse so that WOVN’s service department can deliver value to its customers and support their activities. Let me introduce an example of SE’s activities.

Streamlining and automating existing processes is also an important part of SE's role. Currently, there are about 30 people in the service department, but there are only 4 SE members. Since we are providing various kinds of support and running various projects, we are a little short staffed. (Four people may even be a good number for the typical headcount of an “enablement” department.)
In such a situation, it’s not possible for SE members to boost the efficiency of all of WOVN’s operations by themselves. So, the GAS Workshop started as a result of the following feedback: "It would be beneficial for everyone if SE could provide members with an arsenal of tools for efficiency and improvements It would be a win-win situation as we would be able to cut down on the work we do while learning about tools to boost efficiency.”

GAS (Google App Script) is a programming language developed and provided by Google, and it is based on JavaScript, a programming language that runs on a web browser. It can be used for Gmail, Google Calendar, and Google Spreadsheets to improve work efficiency. For example, you can extract data from Google Calendar and turn the data into lists, or automatically send a mass email to specific addresses at a certain time, both of which are convenient.

The GAS workshop is an opportunity for those who have no programming experience to learn programming because GAS itself is based on programming languages.
For example, the 2-hour process of updating a spreadsheet line by line can be wiped away with one click if you create a script with GAS that carries out automatic corrections all at once.

It can also improve work efficiency and automate tasks. And in the future, WOVN’s members will be able to identify areas for improvement and improve their processes without direct support from SE, and as a result, they will be helping SE. Everyone wins! And it's a wonderful workshop and project. 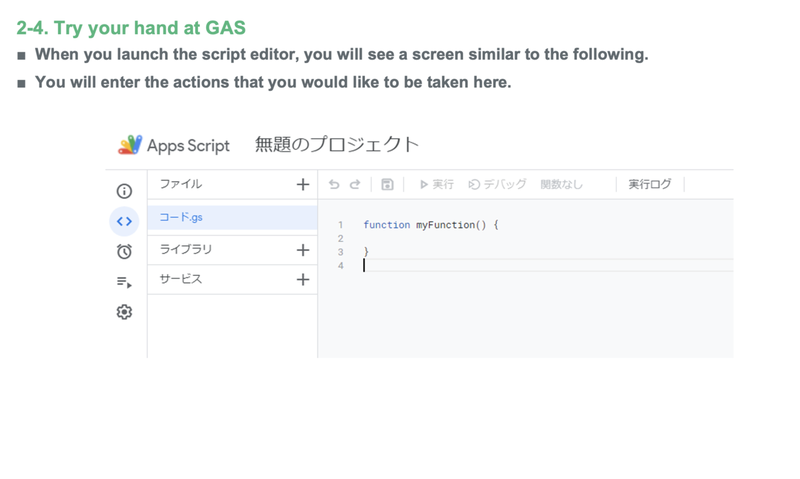 As mentioned previously, SE is actively working to create an environment that enables the service department to take action and work comfortably.

SE does not carry out any tasks that are exclusive to the team. SE is the team which supports the main activities of the service department, which includes the onboarding, customer success, customer support, and localization teams.

SE is carrying out visualization, standardization, alleviation, automation, boosting efficiency, and creating documentation, but there are many other things we would like to implement going forward.

For example, one of the current issues we are focusing one is educating everybody about the values, mechanisms, and characteristics of WOVN. First of all, we are designing a program to be provided when a new member joins the company, not only at the service department but also at the sales and marketing departments.

The program aims to onboard participants regarding the common values and enthusiasm WOVN works under, the values WOVN wants to provide to the world, the kind of end goal it is aiming for, and the technical traits of WOVN and the issues that they solve. 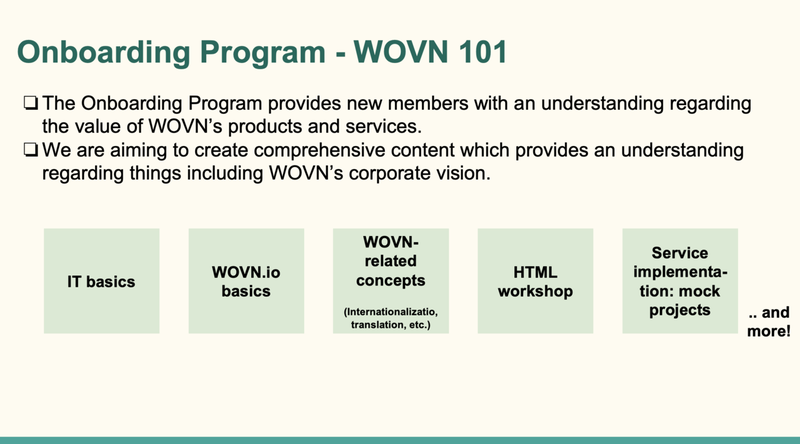 And so, we want to be a team the entire company can rely on.
- You would like to discuss a project with another team, but you don't know how to convey the idea through presentation materials.
- Since the burden of existing projects is increasing, you want help identifying the areas for improvement.
- There are business processes that are problematic, and you would like help adjusting these.
We would like to sustain a position as a team that the service department and non-service departments can rely on for consultation in these kinds of circumstances.

We’d like to continue to work hard so that we can continue to be a team that the WOVN service department can rely on and be actors behind the scenes despite the unfamiliarity with what we do.
(It’s a bit hypocritical of us to publicize an article such as this while claiming that we are an actor working behind the scenes, but this article was a result of cries to raise awareness about SE’s endeavors, and so the feeling of wanting to elaborate prevailed.) And we need to update readers on what we get up to so please look forward to our future updates.

That’s it from Service Enablement. Thank you for reading!