Expressing something in various words

That which we call a rose by any other word would smell as sweet.

The above quotation is from the closing line in the famous scene that begins with "O Romeo, Romeo, wherefore art thou Romeo?" in William Shakespeare's play Romeo and Juliet.

When I first encountered this verse, I was blown away by the richness of expression it held, and it actually helped me love literature a little more. I realized that no matter how you designate a thing or event, the essence does not change.
The term "verbalization" has become popular these days, but by verbalizing things, for better or for worse, it gives "meaning" to the same thing. I sometimes have to remind myself that as a person who works in the language business, I have to be aware that verbalization can give meaning to a word, which could become a preconceived notion or prejudice.

We call those red roses I referred to as “Bara” in Japanese. The name comes from "Ibara,” meaning thorns and briars as used in "Ibara no Michi,” which means "walking through a thorny path." The Japanese language seems to have given its name because of the spikes and pain you feel when touching it.

On the other hand, the English word “rose” comes from the ancient Celtic word “rose,” which means red. So, the flower takes its name from its color.

The Latin word "rosa" means "rose" when referring to a flower, but "pink" when referring to the color. The ancient Celtic word for "red," which is "rose," becomes "pink" in Latin.
Was there a flower called rose first, and was the word "rose" used to describe the color of the flower? Or is it the other way around?
I couldn't find out which was the origin, so if anyone knows, I'd like to know too.

Either way, red and pink signify passion and love for us living in the modern world. As such, people in the West have been attaching such meanings to roses since ancient times.

In Japan, the rose became a flower with spiky thorns, while it became a passionate red rose in the West. Though they were fundamentally the same flower, there was a massive difference in how people perceived it, depending on what they called it. 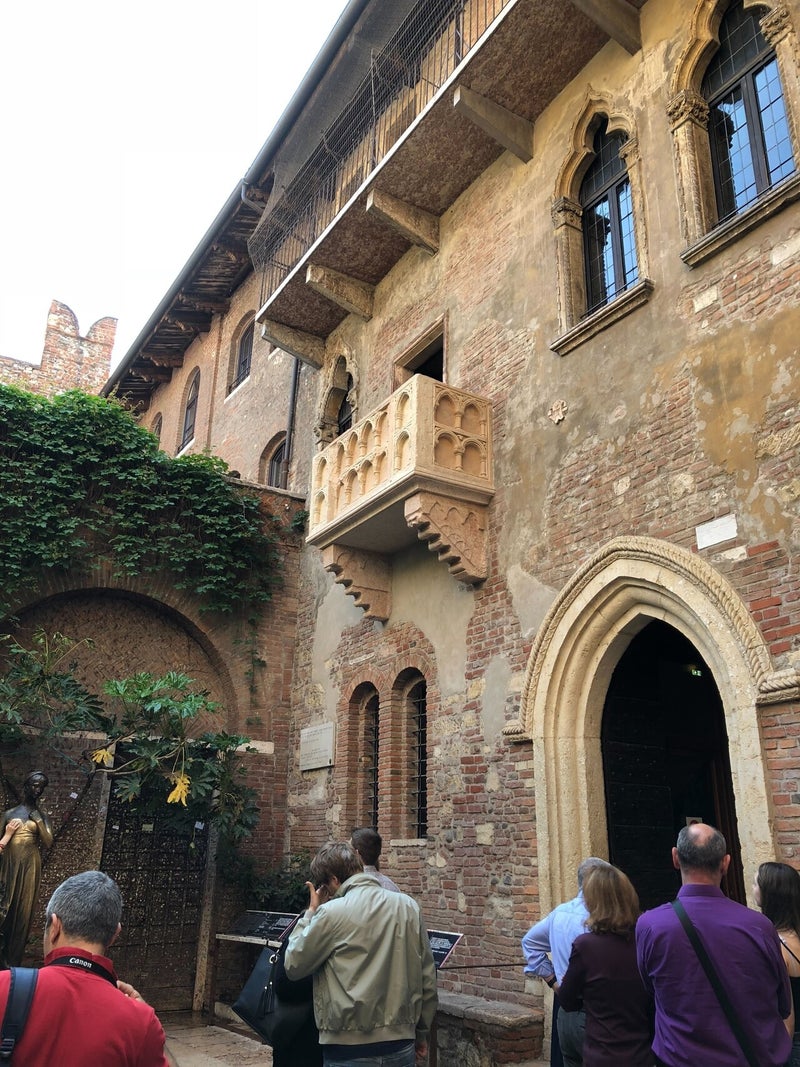 Juliet’s balcony in Verona is one of the places a Romeo and Juliet-story lover would go. I visited there on April 25th, 2018.

When it comes to music, I love jazz and reggae. I love them because I can feel "life" in those musical experiences.
Even if it is the same tune, it sounds completely different depending on the place or situation. Both jazz and reggae have room for play. The musicians don’t just stay true to the score but capture the atmosphere and enjoy improvising and making various arrangements. That is the essential part and is where I feel the “life” of the music.

We call this kind of musical performance a "live" performance, which in turn means "life." In Japanese, we say “Namaenso” when something is performed live. “Nama” is written in Kanji as “life,” so it is used in this way.

The roots of Japanese and English are entirely different. Japanese is derived from the Chinese language and English is a Germanic language influenced by the Latin language. You can see that the two languages have a completely different origin, but they both express things that change by the day or time as “live.”

I was swamped during my 2nd and 3rd year as a member of the workforce. At that time, I was literally mentally exhausted (the Kanji for “busy忙” is written using radicals “heart忄” and “death亡”), and I could not help but think why everyone was dying for a change. I thought that I would not have to work so much if everyone was happy with the status quo.

At that time, I came across a book and felt much better learning that "wanting to change means being alive.”
Living things always want a change. It’s impossible not to change. If you think that you are "not changing," you're actually regressing in many cases. It's not that you're regressing relatively because everyone around you is developing; it's because you're regressing absolutely.

So, I came to think that living organisms such as organizations and companies, formed by a group of people, desire to change. It is impossible to remain in the status quo without any change because we are alive.

But to enjoy life, we need some room to play. Of course, we all want things to happen according to our plans, but if we do fail or get into trouble at any given moment, let’s take advantage of it, see it as an opportunity, and have enough room to make things better.